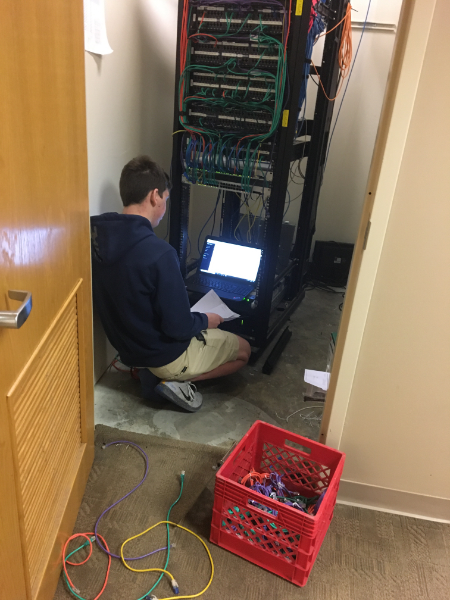 The Ohio State University in Mansfield held their 2020 Leadership, Diversity, and Service Awards virtually on their YouTube page on April 23rd. Mid-Ohio Educational Service Center is proud to announce that Cristian Robinson was named their Student Worker of the Year.

Robinson worked in the MOESC’s Technology Department from the fall until schools closed in March. Candy Bores, Technology Manager, said she was impressed with his skills from the beginning. “He came in with a vast knowledge of networking technology. Had all of his certifications, and knew switches, routers, and was learning software.”

Bores said the goal was to increase his knowledge on the tech support side, which can often be a quiet, behind-the-scenes job. However, Robinson developed into more. “The growth he had during the time he was here was amazing. He started taking in the facts of what other people did and how they did their work, and decided that there was not just one way to do anything. He would work with our staff members, see how they create tasks, how they were doing things and then help them.”

Bores said Robinson was praised by all levels of staff for his abilities to help with technology problems. Jim Smith, Sponsor Liaison at MOESC said, “Oftentimes when I went to the technology office and Candy was unavailable, Cristian was able to step in and provide me with help to answer any questions I had. Cristian was professional and knowledgeable, and as he spent more time at Mid-Ohio ESC, he became more personable and comfortable in his role.”

Bores also said he took on the extra responsibility of organization of the department. “The cabling was a mess,” she explained.”He was able to organize and move cables, inventory three large closets, and work on network switches and routers. This is not a project that is normally done by a student intern, let alone someone who was new to our organization.”

Robinson won a $500 scholarship from OSU-Mansfield for his accomplishment. Bores said it’s really only a small token. “This honor is just a great way to show him the appreciation and the thoughtfulness that he showed all of us. We hope that his future has been enhanced by his time here at Mid-Ohio ESC.”