Today
Partly sunny, with a high near 39. North wind 5 to 8 mph becoming calm in the afternoon.
Tonight
Mostly cloudy, with a low around 31. South wind 7 to 17 mph.
Tuesday
Showers likely, mainly between 8am and 11am. Mostly cloudy, with a high near 49. Breezy, with a southwest wind 18 to 23 mph, with gusts as high as 37 mph. Chance of precipitation is 60%. New precipitation amounts between a tenth and quarter of an inch possible.
Weather forecast provided by weather.gov.
Sign In LinkSearch
Main Navigation 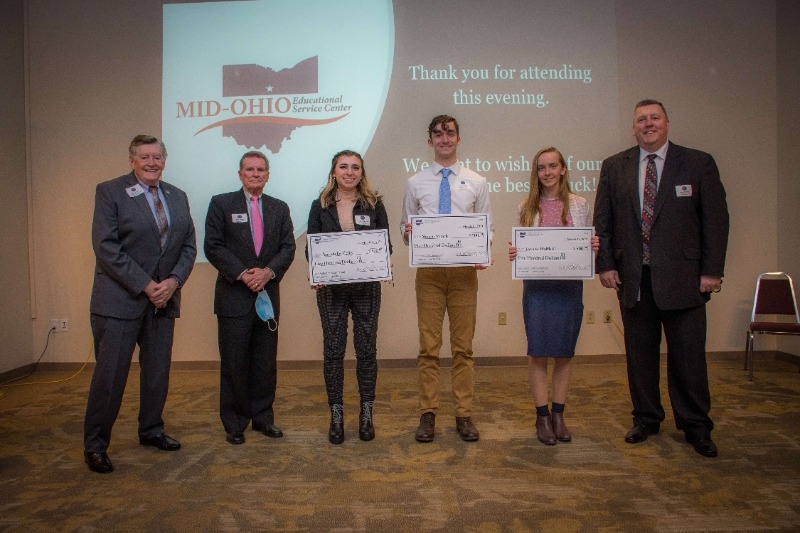 Three students were awarded $500 scholarships each based on their school grades, test scores, activities and an essay detailing the positive impact of one educator on their lives.  All students read their tributes aloud and introduced their “Positive Impact Person” to the audience of over 100 people; including family members and school administrators.
Winners of the $500 scholarships made possible by Mid-Ohio ESC Board of Governors were awarded to: Simon Shawk, Galion City Schools; Annabelle Zerby, Highland Local Schools and Joanna Halfhill, Lexington Local Schools.

Shawk acknowledged Michael Moore as his Positive Impact Person and said his goals were to graduate at the top of his class and run track in college. He said eventually he wants to find his place in the world to make a big positive impact on people helping them feel more fulfilled in life.

Zerby praised her Positive Impact Person, Jeanette McCann, and said her biggest goal in life is to become an aerospace engineer. She said NASA is an option for her, but she’s looking forward to many opportunities. She is currently deciding between Ohio State, Penn State, and Purdue for her college education.

Halfhill honored Anne Petrie and said her goal is to attend the United States Military Academy to major in engineering. “I want the discipline, rigor, and accountability in my daily life,” she said. Her long-term goal is to become an officer and make her career in the military.

MOESC Superintendent Kevin D. Kimmel said, “These 11 students truly represent the best of the best in the region, and I want to congratulate them on their many accomplishments. I also want to thank the individuals that the students selected as their Positive Impact Person. This is quite an honor to know that you have made a difference in these students' lives.”

To honor former State Superintendent Dr. Franklin B. Walter, the Ohio Educational Service Center Association (OESCA) established the Franklin B. Walter All-Scholastic Awards to promote student achievement and recognize academic accomplishment.  One student from each of Ohio’s 88 counties will be honored at a ceremony April 27th in Columbus.